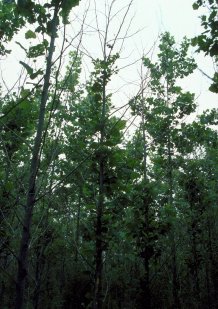 Dieback of the Amazon rainforest has long been touted as a possible climate tipping point, even though only a small minority of Earth System Models were projecting dieback.

A new study by researchers at the University of Exeter shows that this situation has now changed. Among the latest Earth System Models which simulate changes in forest carbon, most models now produce dieback events due to climate change in Amazonia.

Previous studies had suggested that once the tipping point is crossed in the Amazon, the whole region would experience severe dieback, but the new study – published in the journal Earth System Dynamics – finds that many of the latest models instead project localised dieback events.

The research team, from the University of Exeter, say that while we may not be at severe risk of losing the entirety of the Amazon rainforest due to climate change alone, localised dieback would still have severe consequences for the local communities and ecosystems.

“Though we see little change in forest carbon across the Amazon, five of the seven models we study show localised abrupt dieback events under global warming”, said lead author Isobel Parry, of Exeter’s Department of Mathematics and Statistics.

“It is important to remember that even localised dieback can have severe consequences. This study suggests that for every degree of warming above 1.5°C, up to 12% of Northern Amazonia will experience abrupt downward shifts in vegetation carbon.”

The Exeter team also found that many of the detected abrupt shifts in vegetation carbon are preceded by increases in the amplitude of the temperature seasonal cycle, which is consistent with more extreme dry seasons.

A related study led by Dr Paul Ritchie – recently published in the journal Communications Earth & Environment – found that drying in the Amazon rainforest is associated with increases in the amplitude of the temperature seasonal cycle in both models and observations.

“From observational temperature data we can now infer that the Amazon has been consistently drying for more than one hundred years. Earth System Models project a continued drying into the future under global warming and therefore gives us further reason to be concerned about climate-driven rainforest dieback in the Amazon”, said Dr Paul Ritchie also from the Department of Mathematics and Statistics at the University of Exeter.

As senior author Professor Peter Cox put it: “Together, these studies provide a firmer basis for detecting drying that could lead to Amazon forest dieback, but they also heighten our concerns about forest dieback under climate change”.

The papers are freely available at: